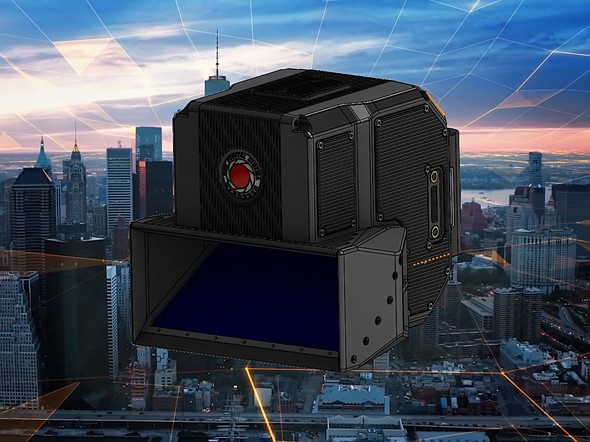 Computer vision company Lucid and cinema camera maker RED have partnered to create an 8K 3D camera that can capture 4-view (4V) holographic images and video in real-time. The camera is designed to work with RED’s upcoming holographic Hydrogen One smartphone—both by shooting holographic content that can be viewed on the phone’s 4V screen, and by using the modular phone as a “viewfinder.”

The camera itself (which has yet to be named) will be made by RED, but it will be powered by Lucid’s “real-time 3D Fusion Technology.” This tech generates 3D/4V footage in real-time, promising to turn a processing-intensive task into “an instantaneous point-and-shoot experience.”

The camera looks like any other RED cinema camera… sort of. Except instead of one 8K sensor the camera uses two “perfectly hardware-synced” 4K sensors and a beam splitter to capture and output 8K 4-view footage. That footage can be viewed after the fact or even live using the upcoming RED Hydrogen One smartphone, which will be able to integrate directly into the RED 3D/4V and act as a 3D viewfinder.

It’s important to not that this isn’t just a concept. RED and Lucid had a working prototype shooting scenes at the Hydrogen One launch party on May 19th.

If you see this as a gimmick—and an expensive one at that—you’re probably not alone. But Lucid CEO and Co-Founder Han Jin has faith the world is ready for, and in fact craving, 3D/4V content you can digest without goggles or glasses.

“This partnership allows us for the first time to deliver the highest-quality 3D capture to our customers, and now they can view the content immediately in 3D/4V without headsets,” says Jin via press release. “At a time when two of the biggest challenges in the industry have been resolution and easy viewing of 3D content, we believe this is the solution everyone has been waiting for.”

We don’t have official pricing and release date information just yet. All Lucid and RED will reveal is that the camera—colloquially called the RED 3D/4V but still officially unnamed—will “be rolled out” in Q4 of 2018. To learn more about Lucid’s tech or this strange new camera, read the full press release below or visit the Lucid website.