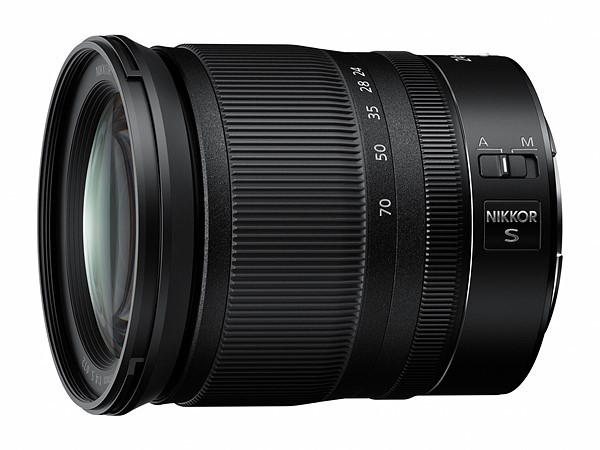 You can’t launch a new camera system without lenses, and Nikon has three Nikkor Z-mount lenses available at and slightly after the launch of the Z 7 and Z 6. They include a 24-70mm F4 S, 50mm F1.8 S and 35mm F1.8 S (the ‘S’ represents the subtle silver ring around the lens, according to Nikon). The company is also developing a 58mm F0.95 Noct lens and has released a three-year roadmap of what’s next.

The 24-70mm F4 S features a buttonless collapsible design, 14 elements (which include ED aspherical, ED and aspherical) and both Nano Crystal and fluorine coatings. As with all of the new lenses, the 24-70 has electromagnetic aperture control, uses a stepping motor for autofocus and countermeasures to reduce focus breathing. A customizable control ring can be used to adjust focus, aperture and exposure compensation. The minimum focusing distance of the lens is 30cm (11.8″). The 24-70 will serve as a kit lens for both the Z 7 and Z6.

The Nikkor Z 50mm F1.8 S is one of two standard primes in the initial lineup. Of its 12 elements, two are ED and two are aspherical, and there’s a Nano Crystal Coat, as well. The lens has a nine-blade aperture, internal focusing and a minimum working distance of 40cm (15.7″).

The third of the initial group of lenses is the Nikkor Z 35mm F1.8 S, which has 2 ED and 3 aspherical elements as well as a Nano Crystal Coat. This lens has a rear focusing system and a minimum distance of 25cm (9.8″).

NIKKOR Z lenses pursue a new dimension in optical performance, by taking advantage of the superior design flexibility made possible by the combination of the larger Z mount with its inner diameter of 55mm, and a short flange focal distance of 16mm. The lenses offer sharp resolution with both still-image and video recording, and are equipped with functions that include: compensation for focus breathing (the shifting of the angle of view when focus is adjusted), quiet operation, smooth exposure control, a control ring and performance that is well suited for video capture.

Additionally, the Mount Adapter FTZ has been designed to allow users of Nikon SLR cameras to utilize their existing NIKKOR F mount lenses with the Z mount system and enjoy taking advantage of an even wider variety of lens characteristics with their photography.

Nikon is currently developing the NIKKOR Z 58mm f/0.95 S Noct, a standard prime manual focus lens and the fastest lens in Nikon’s history. The design of the Noct lens exemplifies Nikon’s mission to pursue the ultimate optical performance in the mirrorless category. As the result, the Noct is positioned at the top of the S-Line. In addition, Nikon is planning on releasing a variety of new lenses that will continue to expand its line of attractive, high-performance NIKKOR Z lenses that further extend photographers’ creative expressions.

The NIKKOR Z 58mm f/0.95 S Noct that Nikon is currently developing will be a large aperture, standard 58mm prime focal-length, the fastest lens in Nikon’s history3, manual-focus lens positioned at the very top of the S-Line. It will stand to symbolize the Nikon Z mount system’s new dimension in optical performance.

It has inherited the design concept behind the original AI Noct-NIKKOR 58mm f/1.2, a standard prime lens released in 1977, named for “Nocturne” (a musical composition inspired by or evocative of the night), and was popular for its ability to finely reproduce point light sources as point images. This new Noct lens that is currently in development will take advantage of the advanced design flexibility afforded by the Z mount, pursuing ultimate optical performance. Development continues with the goals of achieving an extremely fast maximum aperture of f/0.95, offering the ultimate in NIKKOR rendering performance with superior detail and sharpness. Additionally, the goal is to achieve beautiful blur characteristics, or bokeh, with good continuity, and ensure outstanding point-image reproduction capabilities for more compelling, three-dimensional imaging.

Information in the roadmap, including release dates, are subject to change. Product names after the NIKKOR Z 58mm f/0.95 S Noct are not yet finalized.


We use cookies on our website to give you the most relevant experience by remembering your preferences and repeat visits. By clicking “Accept”, you consent to the use of ALL the cookies.
Do not sell my personal information.
Cookie settingsACCEPT
Manage consent