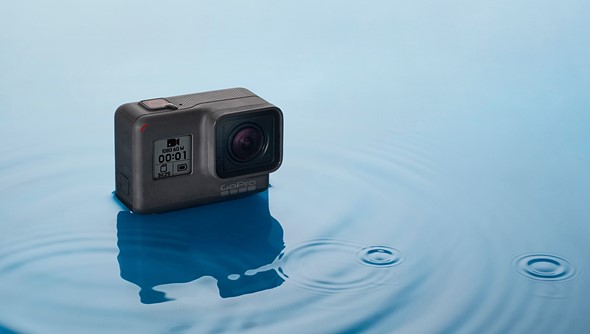 t seems the rumors and leaks from earlier this week were spot on, and right on schedule (a day early, actually) GoPro has revealed its new, entry-level action camera: the $200 GoPro HERO.

The HERO is the cheapest action camera GoPro has ever announced, coming in at the same price tag as the HERO5 Session while boasting several features that are reserved for the company’s regular line (read: not the Session lineup) of action cams. If you’re keeping track, the HERO lineup of action cams now goes: GoPro HERO ($200), GoPro HERO5 ($300), and GoPro HERO6 ($400).

As GoPro SVP of Product, Meghan Laffey, explains, GoPro is hoping that the lower price-of-admission into the GoPro action cam family will entice first-time users who would otherwise pick up a third-party option or just keep using their phone. “HERO is a great first GoPro for people looking to share experiences beyond what a phone can capture,” says Laffey. “HERO makes it easy to share ‘wow’ moments at a price that’s perfect for first-time users.”

There’s not much to say about the GoPro HERO that wasn’t already revealed in Monday’s leak, but here goes. The main features are exactly what we expected.

The camera captures 1440/60p and 1080/60p video and 10MP stills, features a 2-inch display, voice control, electronic video stabilization, waterproof to 10M (30-feet) out of the box, and compatibility with all of the current GoPro HERO mounting accessories on the market (30+ from GoPro itself).

Finally, the camera also features compatibility with the GoPro and Quik Stories mobile apps, the latter of which can automatically edit your captured footage into ready-to-share highlight videos.

The entry-level GoPro HERO action camera is available starting now from the GoPro store and online retailers alike for $200. To learn more about the GoPro HERO or pick one up for yourself, click here.

GoPro, Inc. has added a new HERO camera to the family. On sale now, HERO is a $199, go-anywhere, capture-anything camera that makes it easy to share experiences that would be difficult to capture with a phone.

HERO features a 2-inch touch display, is waterproof to 30 feet and is extremely durable, making it the perfect GoPro for kids, adventurous social sharers and travelers.

“HERO is a great first GoPro for people looking to share experiences beyond what a phone can capture,” says Meghan Laffey, GoPro’s SVP of Product. “HERO makes it easy to share ‘wow’ moments at a price that’s perfect for first-time users.”

Sharing cool experiences with HERO is simple. It offloads your photos and videos to the GoPro app which creates fun, shareable videos for you, automatically. No more fumbling with your SD card or plugging your camera into a computer. HERO makes it simple.

Those looking for the ultimate GoPro-experience can subscribe to GoPro’s PLUSsubscription service. Cloud backup, damaged camera replacement, 20-percent off accessory discounts and more are included with a PLUS subscription for just $4.99 a month, cancellable anytime.

HERO is available today at retailers around the world and on GoPro.com. Key features include:


We use cookies on our website to give you the most relevant experience by remembering your preferences and repeat visits. By clicking “Accept”, you consent to the use of ALL the cookies.
Do not sell my personal information.
Cookie settingsACCEPT
Manage consent